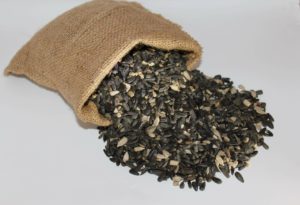 On a suggestion from a friend in Maine and a promise to buy two pounds Vaughn grew the family’s first black oil sunflower crop in 2016 and birds have been rejoicing ever since!

We will be growing several varieties in 2017: a high-oleic oil content sunflower for farm pressed oil and another crop of black oil sunflowers for our avian friends.

Due to a fortuitous set of circumstances our crop was partially shelled so the birdseed comes with hearts as well.

The sunflower is actually native to North America! Archeologists believe it may have been cultivated in the American SW from 3000BC and eventually transported by the Spanish to Europe in the 1500’s and an English patent was granted for sunflower oil extraction in 1716.

Russians began a breeding program under Peter the Great and the Sunflower gained in popularity after a ban on vegetable oils during Lent by the Orthodox Church – with the exception of Sunflower Oil. The rest is history as they say.

Sunflowers are now widely grown in the Northern Plains, Ukraine and Russia.